on January 17, 2012
The elusive Monarch butterfly. I say elusive because he won't let me get a picture of him. (So I had to put a picture of the Guam butterfly.) But he has been around lately. At the most God-incidence of times . . . to remind me of His precious promises to me. 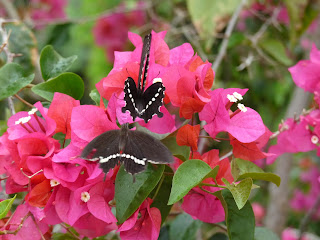 #1 Moving in day - no moving trucks loaded with our stuff to put in the house, but it was the first time to see the house (and move in the luggage). The townhouse that God had opened up for us hours after the one that was GOOD ENOUGH fell through. This one had everything we wanted in a townhouse. What should happen to be fluttering about in our front bushes?
#2 Pick up our new Puppy day - as we walk to the door to pick up the puppy - the birthday present that keeps on giving because it came so early . . . and there it is - the butterfly.
#3 And yesterday . . . we had gone to a cabin for the Labor Day weekend, or at least most of it. Summer is winding down and that's a whole other blog ;-) Anyway, the dog had a rough night and was up early. Everyone else was asleep, so we went for a walk on the nature trail. I had been wanting to walk the trail but it was so warm the day before and no one showed any interest. So off we went. Just me and the pup . . . and the butterfly. There he was again. Right at the edge of the path. As I was trying desperately to hold my cell phone still enough to get the shot, he flutters off and I am left with an empty picture of the bush he was resting on. Not far away, I see him land on an old stump. He just sits there - wings open and close, open and close. I wait. He's too far away for the shot on my cell phone and I am wishing I had my camera with, but I don't. Eventually, the pup and I move on. We made the loop and I came back to see if he was still there. And to my surprise, he was.
One  last long drawn out story - this time no butterfly, but the light went on in my head and heart about how symbolic the butterfly showing up has been.

Our family had been going back and forth about the second vehicle thing. We needed another one because we THOUGHT I would be driving my hubby to the metro and picking him up every day so I'd have his truck during the day. Great plan - for about a week and half. The office got the official notice they were moving. So now he would either ride the metro on occasional days or drive to the new office because the metro doesn't go there. So much for our plan. But back to the vehicle - what to get. My practical side just wanted something older, big enough and good enough to be safe and get us around for the next couple years. But my husband wanted more - so I was praying daily. Would you speak to him? Yell at him? He is NOT being practical! I give up - what do you want? How do we meet in the middle. Thought we just wanted a compact SUV but after disappointing test drives, either we didn't like the feel of the ones we tried or they had NO cargo space . . . so we move up a size. Not as good gas mileage, but not terrible and plenty of space plus 3rd row seats if necessary (or a lot of cargo space). Trying to find a 2011 that is still considered new vehicle but not the 2012 price with upgrades he wanted. The upgrades didn't matter to me, though. I just wanted GOOD ENOUGH.


So we finally find one - it's beautiful. Too beautiful and too fancy, I think. Why does he want this so much? To make me look good and feel good, and because I deserve it, he says.
And it hits me . . . how often do I say the same to God. In my thoughts and prayers and conversations with Him. Well, "this is GOOD ENOUGH..." but He wants the best for me. He wants to spoil me. Because He loves me.

And the butterflies - they show up from time to time. Just to remind me of His love for me. His best wins out over my GOOD ENOUGH.